Please contact our office if you would like to schedule an online training session to go over the tools in your dashboard. Your password protected dashboard is packed full of reports and marketing tools. We want to make sure you fully understand and are able to utilize all of them!

To schedule your training or if you have any questions about the program, please contact:

PowerCard/Eat Local has a new mailing address. This is for all correspondence including completed registration forms. The new address is:

Please contact our support team with any questions.
877-229-7299
support@powercard.com
Posted by Support at 4:12 PM No comments:

Full-service operators know that short-term specials and deals will give their restaurants a temporary revenue boost. But findings from a new study indicate that restaurants can use tried-and-true customer loyalty programs to build and retain a customer base without relying on costly dollars-off promotions.

Restaurant loyalty program consulting firm Loyalogy commissioned this research. Its 50-question online survey of households having incomes of $75,000 and above drew 1,124 responses.  Here’s what the study, titled LoyaltyPlus, found:

• Consumers estimate a restaurant rewards programs would increase their visit rate to a particular restaurant by an average of 35 percent.

• Nearly two-thirds of consumers (65 percent) report they would recommend a restaurant more to others if that restaurant offered an appealing rewards program.

• Four out of five consumers prefer a rewards program with a clearly defined proposition in which they earn points for rewards than a program built solely on periodic, surprise free items.

• Consumers desire a simple reward program enrollment process in the restaurant and would prefer to supply additional information online after they have left the restaurant.

• Although consumer wallets are bulging with plastic cards, 60 percent of respondents stated that they don’t mind carrying a membership card for a rewards program if it’s necessary.

•  While only 10 percent of respondents have paid a fee to join a restaurant rewards program, fully 50 percent state they would be willing to do so if the program offered adequate value. 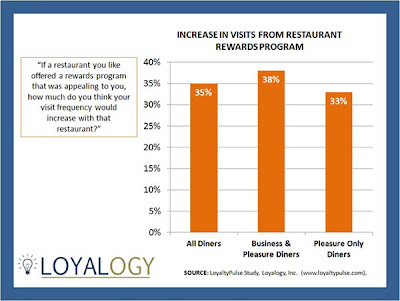 Some readers may be surprised to learn that in an era when social media marketing delivers a torrent of restaurant deal offers to potential diners’ email inboxes each day, 10 percent of customers still pay actual money to join a restaurant loyalty program. And fully half said they would consider doing so in the future.

What’s the attraction for the customer? Typically, a new loyalty program member gets an immediate credit for the amount of his or her membership fee. For example, a customer who forks over $25 to purchase a membership in Landry’s Select Club (Morton’s, McCormick and Schmick’s and other Landry’s brands) get an immediate $25 reward with the promise of many more to come.

For its part, the restaurant gets, at no dollar cost, a new customer likely to return to acquire those future rewards. Of note: Fee-payers are the customers you want. The study found that “among those consumers who dine for business (either business exclusively or business and pleasure), nearly one in four have paid a fee to join a restaurant rewards program (22 percent).”

These are the kinds of customers most full-service restaurants are dying to attract. If half-off daily deals or short-term value-priced specials have lost some of their marketing oomph for your restaurant, you may wish to revisit loyalty programs. The LoyaltyPulse study is telling us they’re ready to make a comeback.

Here's a fantastic article about one of the Originals Groups we work with! 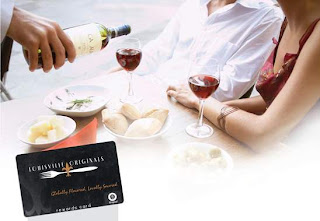 “I think we were very hopeful” that the local marketing program would take off, board secretary Kerry DeMuth said, “but you have no way of knowing in these types of things.”

While Louisville Originals has gift certificate programs as well, “I think the rewards (card) programs would be, by far and away, the most popular with customers,” said Siobhan Reidy, an Originals co-founder who owns the Irish Rover restaurants with her husband Michael Reidy.

For every dollar spent at one of the restaurants, card holders get one point. At 150 points, card holders gt a $10 gift certificate — maintained on the card — to use at any of the restaurants. Double points are offered the first Tuesday of the month. There is a 500 point cap for any one visit and no more than $100 in credits can be redeemed by any one person in a visit.

Cards also can be used in other cities at selected restaurants, originalrestaurants.com.
Besides the reward program, the Louisville Originals sells a limited number of discount gift certificates at its website, louisvilleoriginals.com once every three months, some of which are snatched up with in minutes and nearly all of which are gone within a day. The next such sale is Jan. 15.

Louisville Originals also sells gift cards, which are available online, at ValuMarket stores and downtown at the Louisville Visitors Center. In 2010 and 2011, $296,000 was put on the cards each year and DeMuth said she hopes the group passed $300,000 last year.

It’s also popular with restaurant owners, she said. “We see a good percentage of our sales on any given night coming from rewards customers.”

Last year, Louisville Originals, which was founded in 2005, added Bluegrass Brewing Co., bringing its membership to 28 restaurants that now have 37 locations.

“It was always founded on the idea of finding ways to market ourselves more effectively, more efficiently, to kind of band together and hopefully get more marketing power in the way that the chains have the marketing power that an independent can’t afford,” Siobhan Reidy said.

Membership has varied, running roughly from between 35 and 50 locations, but organizers say that has stabilized around 40. DeMuth said two or three new restaurants could be added by month’s end.
DeMuth said the rewards card, which can be obtained at member restaurants and is operated by a vendor, benefited from the base recognition and loyalty that the Louisville Originals had built up before for the program started.

“We thought we’d only sell them at Christmas time,” she said.

Posted by Support at 5:01 PM No comments:

Posted by Support at 2:52 PM No comments:

Restaurateurs are feeding consumers' appetites for perceived value by serving up more frequent diner programs at their various establishments, National Restaurant Association research finds.
According to the 2012 Restaurant Industry Forecast, approximately 30 percent of restaurant operators are offering frequent-diner programs to their customers in order to increase patronage and loyalty.
The research found that 57 percent of all adults said they'd be more likely to patronize restaurants offering customer-loyalty and reward programs.

"Offering frequent diner programs is one way to satisfy customers' desire for increased value, especially during tougher economic times when consumers want to dine out, but may need a little more incentive to do so," said Hudson Riehle, senior vice president of the NRA's Knowledge & Research Group. "Rewarding loyalty is not only a great way for operators to thank their guests, but also continue to build that customer base going forward."

Among operators who provide those programs, 56 percent in family dining, 45 percent in casual dining, 69 percent in fine dining, 67 percent in quick-service and 52 percent in fast casual, said their respective offerings are more popular now than they were two years ago.
http://www.restaurant.org/nra_news_blog/2012/03/operators-customers-say-loyalty-programs-grow-business.cfm#.UDTjsVIHC1E.gmail

Wish Your Customers a Happy Birthday and Anniversary! 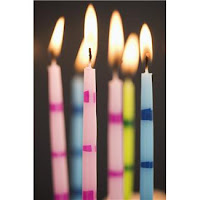 We have established programs to help you efficiently market to customers using customer birthday and anniversary dates already stored in your database.

Birthday and/or Anniversary E-mails
We can automatically send "Happy Birthday" and "Happy Anniversary" emails to your customers using a custom created email template for your business. All you need to do is provide us the offer you would like to send to your customers on their special day. Examples are "free dessert" or "5% off next purchase". The cost is $25.00 a month per program for unlimited emails.

Direct Mail Postcards
This is our most effective program. We can mail custom designed Birthday and/or Anniversary postcards to your customers - one in three customers who receive a postcard will visit your location. Please contact us for pricing and details.

How Many Customers Can I Market To?
Glad you asked! We recently updated the Birthday/Anniversary report in your Dashboard. The new report provides a detailed breakdown of the amount emails and addresses you have collected. We only include customers that have opted to receive communications.

To log-in to your Dashboard, visit the following link:
http://www.powercard.com/biz

We can also help you with any other direct mail campaign you would like to send. Please call 877-229-7299 or email support@powercard.com
Posted by Support at 4:15 PM No comments: